Posted on November 21, 2014 by themagickalpen

The mysteries of transition into Sacred Space and the work that can be accomplished in that transformed state are not easily described. The tool of instruction is a viable one, but often lacks the imaginative quality that sets up the state of being able to visualize what is occurring. Fiction is a wonderful venue to explore these mysteries and the imagery that is naturally conjured creates a dynamic imprint from which to draw in your own practice. With this thought in mind, I am posting an excerpt and links to Parts I and II of a writing of a piece of Esoteric fiction entitled- X’anyuae. Enjoy!

Esoteric Fiction as a Key

An important aspect of spiritual training and magickal practice is that of versatility and being able to re-invent the tools you are working with. This applies not only to being adept at adapting to what you physically have at your disposal, but also developing mental agility in how you express yourself creatively (or as an act of creation). So,I’ve decided to step outside of my comfort zone and try something different- esoteric fiction! The art work was my eldest daughter’s gift to me some years ago as a representation of my former lifetime. It has been the source of much inspiration for me, so it seemed appropriate to name her and tell her story. Here goes and hope you enjoy!…. 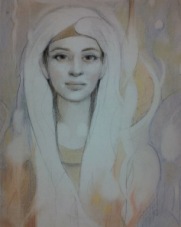 As she lay in her dreamsleep, X’anyuae could hear the gentle voice in her mind saying “It’s time”. She opened her eyes slowly and sat up, allowing the last bit of dream vision to clear. She did not know how long she had been in the dream Temple but she sensed that it had been several days. Today was the final test she must undergo if she was to be initiated as a Vessel. Read More… 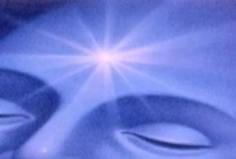 X’anyuae exhaled a clear and intention-filled “yes!” and she stepped through the archway and into the sacred chamber. As soon as she passed through she felt the first of the changes in her physical form take hold. Heat spread through her like wildfire. It was not in the least unpleasant as she had developed a tolerance for this phase of the transition. It had not always been so and the memory of her first time entering this chamber flashed quickly through her mind’s eye. Read More…

Robin Fennelly is an Elder within The Assembly of the Sacred Wheel Tradition and also serves as High Priestess of Coven of the Mystic Path. She teaches and facilitates classes for the Pagan Experience Study Group that serves as foundation for membership within Coven of the Mystic Path. Her spiritual journey is strongly rooted in both Eastern philosophy and theWestern Magickal systems from which she has formed a core foundation that is diverse in knowledge and rich in spiritual practice. A life-long learner, her practice has evolved from the classical and philosophical teachings of books, practical experience and enrichment of this knowledge base by attending workshops of various spiritual traditions presented by master teachers. Robin formally came to the Wiccan path in 1994. Following practice as a solitary for 2 years, she dedicated to Oak and Willow Coven of The Assembly of the Sacred Wheel Tradition in November of 1996. She received her 1st, 2nd and finally 3rd degrees within the Assembly Tradition. As a teacher of esoteric and magickal studies she has used Energetic Anatomy, Tarot, Astrology, Hermetic Qabala, Eastern Philosophy, and Numerology as the foundations of her diverse selection of workshops and writings for more than 25 years. Exploration of varied energetic protocol has been the focus of her work for some time now and the information gained through direct experience informs all of her magickal and spiritual work. Robin’s writings have been featured online, and in print Internationally. She has authored several books incorporating her unique style of writing making use of poetry, prose and pathworking to enhance the concepts presented. She has taught extensively throughout the Pagan community, including Sacred Space Conference, Spring Magick, Between the Worlds Interfaith Conference and Free Spirit Gathering Festival this Summer. Her most recent project is hosting an online blogging community entitled The Pagan Experience. Robin is the owner of Holistic Embrace providing services for mind, body and spirit such as Tarot readings, Astrology reports, Spiritual Guidance and other related offerings. She lives in Eastern Pennsylvania and her life is blessed by a 43-year marriage, five children and the opportunity to work in the field of public education. Robin's esoteric writings can be found on her blogs.
View all posts by themagickalpen →
This entry was posted in Awareness, Bonus Posts, Energetic Anatomy. Bookmark the permalink.

Opening the Gates of Inner Sight

Theophania Temple of Athena and Apollon
Musings From the Mystic Path

A Monthly Newsletter published by Coven of the Mystic Path, ASW

The Call to Light Press - Spiritual Messages for Changing Times.

Writings From the Pagan Community

Teachings on the Path

A Path of Continued Learning

Sharing My Love of Symbols

A Blog of Experience

Trials and Tribulations of a Novice Writer